by admin
in News
0

The European Central Bank is expected to take a pause in its pandemic response and keep policy unchanged when it announces its latest decision on Thursday at 11:45 GMT. Having been the epicentre of the Covid-19 pandemic at one point, Europe is now one of the few regions in the world that has so far managed to avoid a resurgence. Hence, investors are growing more confident about the recovery of the euro area and President Christine Lagarde will probably echo this optimism in her post-meeting press conference at 12:30 GMT. The question is, will the improving outlook be enough to prop up the euro, as it’s becoming increasingly unlikely that EU leaders will be able to reach a deal on a fiscal stimulus package at this week’s summit.

There can be no doubt that the pandemic has hammered Eurozone economies, particularly those of countries hit hardest by the virus, such as Italy and Spain. But as cases of the coronavirus continue to spiral out of control in many parts of the world, Europe can at least take comfort that its policies have been successful in reducing the infections to manageable levels. A strict lockdown that brings economic activity to a halt, followed by a phased easing of the restrictions is the model adopted by most European nations, and it seems to have worked.

Businesses that were shuttered for weeks are now able to reopen and the risk of a major re-escalation is subsiding as most people appear to be abiding by tough social distancing rules. Although the odds of a second wave during the winter months remain uncomfortably high, Europe is much better prepared than before to deal with another outbreak.

Policymakers are also feeling more positive about the Eurozone’s prospects, especially when compared to the United States where an incoherent approach to combating the pandemic has seen infections flare up in several states, threatening the recovery. In the euro area, the recovery seems to be on a much more steadier footing, even if it is lacking in dynamism. 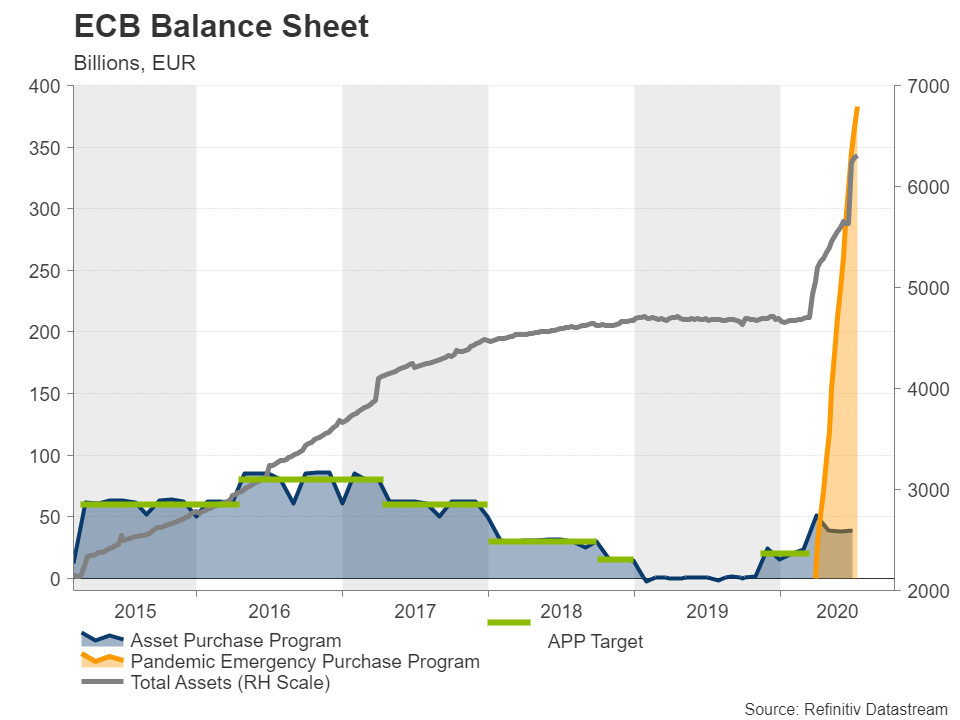 In a recent interview with the Financial Times, Lagarde hinted that the ECB was likely done for now, saying “we have done so much that we have quite a bit of time to assess that carefully”. Hence the Bank is almost certain to take no new action at the July meeting, which means the focus at the press briefing will instead be on other matters troubling investors. Specifically, just how flexible is the Pandemic Emergency Purchase Programme (PEPP)?

Question marks about flexibility of PEPP

Rumours that the Governing Council is split about how much flexibility should be given to the PEPP have been circulating the markets for some time. Although the ECB has made quite a number of exceptions to its rule book in its emergency programmes, there are still worries that should periphery yield spreads shoot up in the event of another virus turmoil, its current toolbox won’t be enough to calm markets down.

Still, as much as investors would appreciate gaining more clarity on how far the ECB is willing to go to keep yield spreads low, a more immediate priority for them and for policymakers is how soon will the European Union agree to a fiscal stimulus package. EU leaders are set to meet on July 17-18 to discuss the proposed €750 billion virus relief fund designed to assist heavily indebted Eurozone members recover from the pandemic. But all the indications are that a compromise deal is not on the cards this week, with a decision likely to be pushed back yet again to a later date.

A delay to the rescue package could disrupt the euro’s current bull charge. The single currency has just broken above its June peak of $1.1422, clearing the way for the $1.15 handle. Higher up, the 161.8% Fibonacci retracement of the June down leg at $1.1580 would become the next target.

Strong gains towards the $1.15 level and beyond are more than possible if a large fiscal package is signed off at this week’s EU summit. However, in the absence of an agreement, the euro would be at risk of losing steam and potentially easing towards the 61.8% Fibonacci of $1.1325. A sharper pullback could be triggered if EU disunity is on full display at the weekend, making a drop towards the heavily congested area around the 23.6% Fibonacci of $1.1227 more likely.

Another danger for the euro is the risk of the ECB sounding too optimistic on Thursday as this would send the wrong signals to the markets about policymakers’ readiness to do whatever it takes to get the Eurozone economy back on its feet.