The entire simple structured framework for getting and staying profitable trading forex.

Forex Vs. Cryptocurrency In 2020: Are Forex Traders Leaving In Favor Of Crypto?

What Technical Indicators Make a Difference for Forex Traders?

How to Pick the Best Forex Pairs for Trading? |

GDP data out of the Eurozone on Thursday and Friday are expected to show the continent is facing its worst economic crisis since the second world war. Yet, the euro is looking the most bullish against the US dollar in a very long time. A strong stimulus response, combined with relative success in bringing the COVID-19 outbreak under control, has raised confidence in Europe’s ability to not only fight the crisis but to come out of it stronger. Hence, worse-than-expected readings are likely to be ignored, while positive surprises could further empower the single currency.

Germany to outperform other EU states

Germany will be the first to report its GDP print for the June quarter on Thursday (0800 GMT), with its economy expected to have contracted by 9% compared to the first quarter. France and Italy will publish their numbers on Friday at 0530 GMT and 0800 GMT respectively. The French economy likely suffered a staggering 15.2% contraction in Q2, while Italian GDP is forecast to have shrunk by a similarly awful 15.0%.

The disparity between nations highlights the greater reliance of countries such as France and Italy on the tourism industry and the wider services sector than a manufacturing powerhouse like Germany. Higher government spending and a somewhat looser lockdown than many of its European peers may also have helped Germany to perform notably better during the height of the crisis. 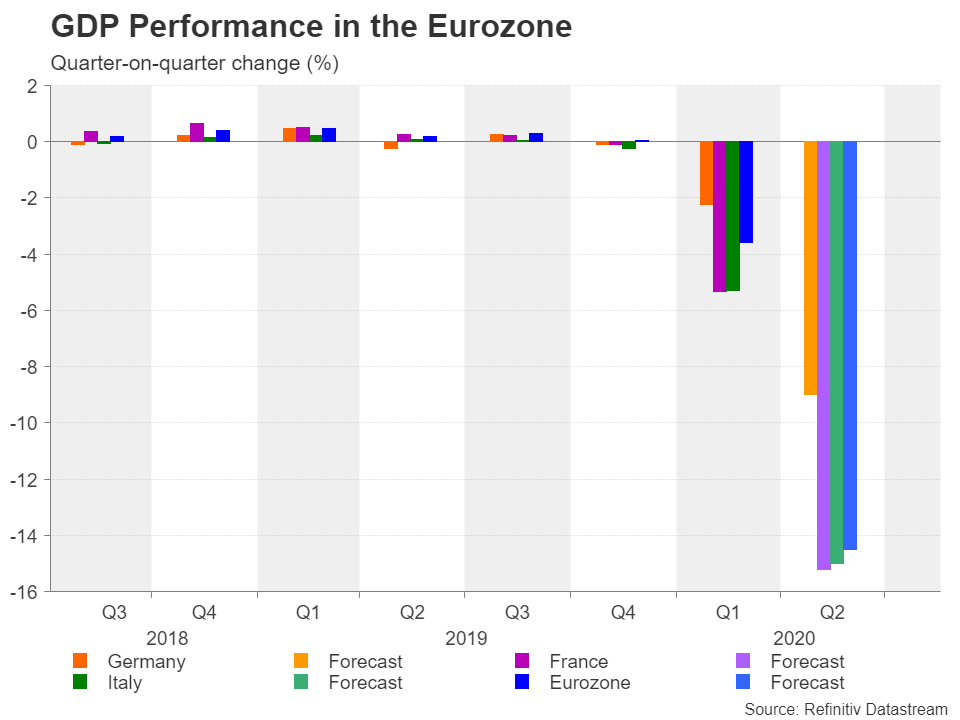 As for the whole of the euro area, economic output is projected to have declined by a record 12% on a quarterly basis, taking the annual rate down to 14.5%. Following the 3.6% contraction in Q1, the Eurozone economy is now officially in recession.

Europe headed for a V-shaped recovery

But none of this will be anything new for the markets and with the latest PMI indicators pointing to an accelerating recovery in July, the region is set for a strong bounce back in the third quarter. The European Union’s swift and tough response to the coronavirus pandemic, at least when compared to the United States, has paved the way for a smooth reopening. Moreover, the re-imposition of lockdowns due to fresh flare-ups have so far been confined to regional districts, meaning Europe isn’t facing the same bumpy recovery as America is.

With that in mind and EU politicians finally resolving their differences on a €750 billion virus rescue fund, the prospect of a V-shaped recovery is looking good. Traders are certainly taking note of this positive shift in the Eurozone’s outlook as the euro has skyrocketed to near 2-year highs versus the dollar.

Better-than-forecast GDP figures could add more fuel to the euro’s rally, pushing it towards the 261.8% Fibonacci extension of the June downleg at $1.1835. Clearing this hurdle would turn attention to the $1.19 handle.

However, if the numbers disappoint, although they would have no impact in denting the optimism, they could nevertheless trigger some profit taking, with the 161.8% Fibonacci extension of $1.1580 being the primary support area to the downside.

In the more medium term, the euro is likely to extend its uptrend if the European Central Bank becomes less dovish over time and the US Federal Reserve signals that further monetary easing is on the cards. But of course, Europe is not totally out of the woods yet and virus cases could escalate again at any point. Thus, the virus data will continue to be as vital an indicator as economic ones.

Legal disclaimer:
The material does not contain a record of our trading prices, or an offer of, or solicitation for, a transaction in any financial instruments. XM accepts no responsibility for any use that may be made of these comments and for any consequences resulting in it. No representation or warranty is given as to the accuracy or completeness of this information. Consequently, any person acting on it does so entirely at their own risk. The research and analysis does not involve any specific investment objectives, financial situation and needs of any specific person who may receive it.

It has not been prepared in accordance with legal requirements designed to promote the independence of research, and as such it is considered to be marketing communication. Although we are not specifically constrained from dealing ahead of the publication of our research, we do not seek to take advantage of it before we provide it to our clients. We aim to establish, maintain and operate effective organisational and administrative arrangements with a view to taking all reasonable steps to prevent conflicts of interest from constituting or giving rise to a material risk of damage to the interests of our clients. We operate a policy of independence, which requires our employees to act in our clients’ best interests and to disregard any conflicts of interest in providing our services.

CFDs are leveraged products. CFD trading may not be suitable for everyone and can result in losing all of your invested capital, so please make sure that you fully understand the risks involved.

The entire simple structured framework for getting and staying profitable trading forex.