by admin
in News
0

Japan looks set to enjoy a rare feat of being at the top of the G10 growth league in the second quarter when it reports its GDP estimate on Monday (Sunday, 23:50 GMT). But the achievement will hardly be celebratory as Japan had already entered recession in Q1. Moreover, despite having initial success in containing the coronavirus outbreak, the country is now facing a second wave of infections that dwarfs the first one. Nonetheless, the data is not expected to be a gamechanger for the Bank of Japan, meaning it is not anticipated to generate much excitement for the yen crosses.

Japan was one of the few countries amongst advanced nations that did not impose a strict lockdown policy at the height of the initial outbreak. Sweden was another and may yet beat Japan at the top of the growth table when it publishes its GDP print later in the month. But until then, the Japanese economy is expected to have suffered a smaller contraction in the June quarter relative to its peers as fewer businesses were shut down during the period.

According to a Reuters poll, analysts are projecting Gross Domestic Product (GDP) to have fallen by 7.6% on a quarter-on-quarter basis and by 27.2% on an annualized basis. Although that may compare favourably to the Eurozone’s 12.1% quarterly contraction and the United States’ near 33% annualized drop, it would nevertheless represent the steepest decline in Japanese GDP on record. 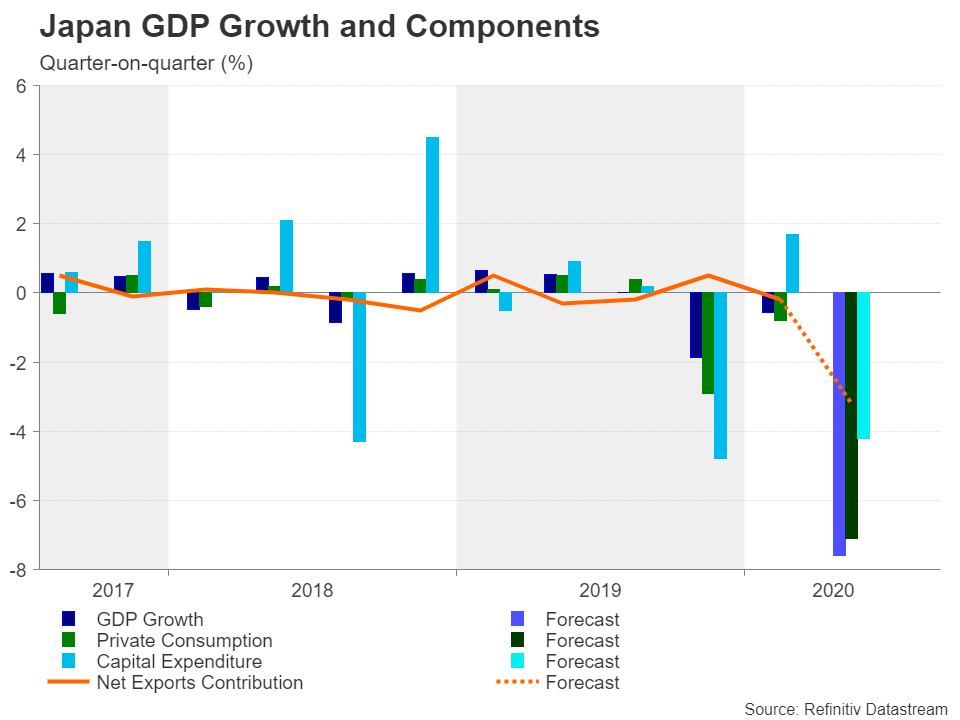 Consumption and exports key to recovery

A plunge in domestic consumption and exports are expected to have been the biggest drag on the economy. In spite of the absence of an enforceable lockdown – Japan’s constitution bars such restrictions – many consumers appear to have abided by the government’s advice to stay at home. Private consumption is forecast to have plummeted by 7.1% q/q.

More interestingly, Monday’s data should reveal the extent to which countries with looser lockdowns were able to avoid a sharp downturn when the rest of the world was in hibernation, especially for an export-orientated economy like Japan’s. Net exports are expected to have shaved off 3.2% from GDP in the second quarter as global trade came to a halt in April and much of May.

However, as has been the case with most other Q2 indicators, investors will probably take the ‘outdated’ grim data in their stride and instead pay greater attention to more recent economic pointers such as Wednesday’s trade figures for July. Japan’s exports surged in June but were still down 26.2% on an annual basis due to earlier declines. Another monthly jump in July would bode well for Japan’s recovery. 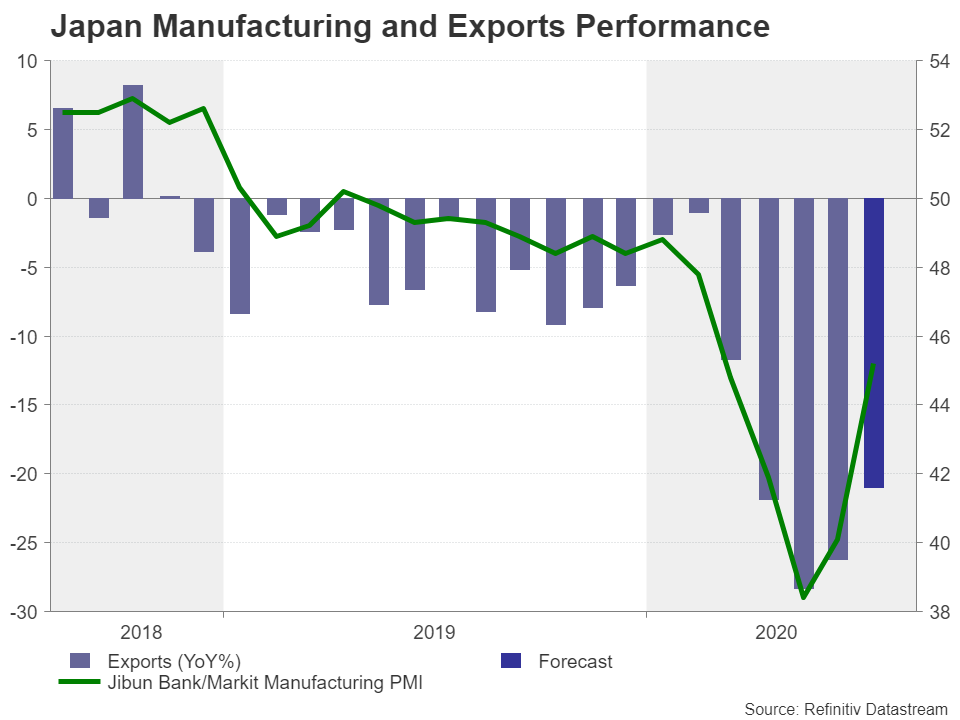 Inflation numbers are also due later in the week on Friday, as well as the flash manufacturing PMI for August, which should shed further light on the pace of the recovery. While Japan’s manufacturing slump was milder than other countries’, its rebound has been slower, with the Jibun/Markit PMI still stuck below the 50 mark that separates contraction from expansion.

More stimulus may be on the cards

Should the recovery fail to gain momentum, it will likely add pressure on Shinzo Abe’s government to do more to revive the economy. Abe’s approval rating has fallen to record lows as the public disapprove of his handling of the coronavirus crisis. With elections coming up in just over a year’s time, additional fiscal stimulus is likely, though this may not do much in boosting his popularity if voters judge him on his virus record.

Daily cases of COVID-19 continue to rise at a worrying rate in Japan, casting a shadow over the outlook as consumption is unlikely to bounce back to pre-covid levels without a substantial drop in the infection rate. This is also something probably keeping policymakers at the Bank of Japan awake at night as the pandemic has hit at a time when the central bank is almost out of ammunition. 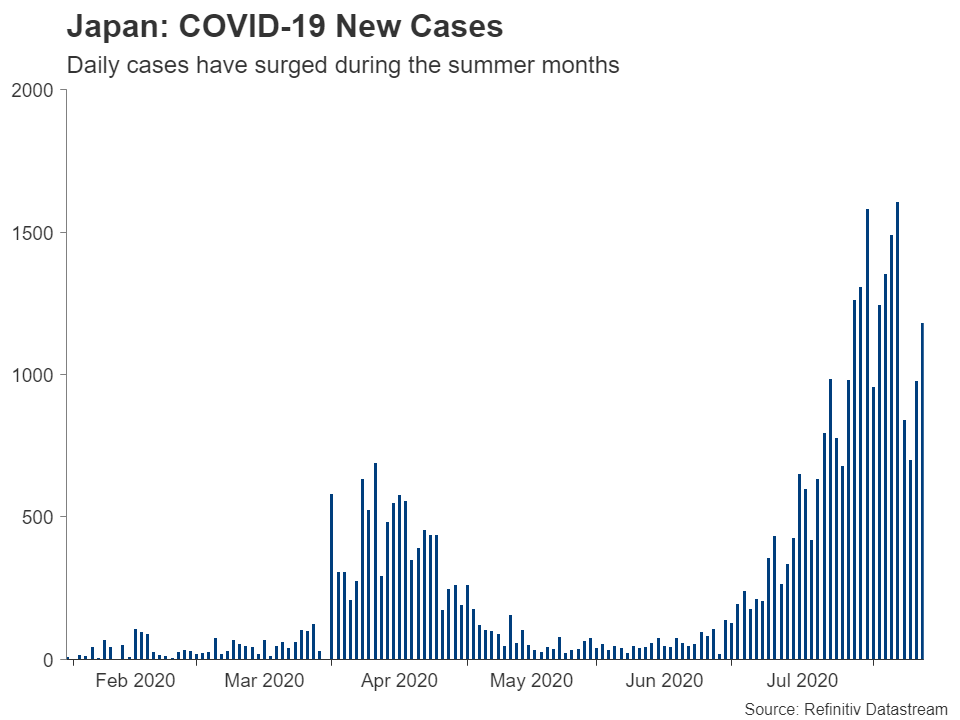 The BoJ’s limited scope for a meaningful monetary policy response has left the yen entirely at the mercy of global risk sentiment. That’s not to say, however, that any surprising trends from the upcoming releases won’t have the potential to accentuate the market moves.

Yen to take cues from the dollar

A positive set of numbers out of Japan next week combined with dollar weakness could push dollar/yen towards the 105.39-105 support region, with the former being the 38.2% Fibonacci retracement of the February-March downtrend. A drop below this area could see June’s 4½-month low of 104.17 being retested.

However, should the data raise fresh concerns about the health of Japan’s economy, dollar/yen might just manage to break above the immediate resistance of the 107 handle, which would then clear the way for the 108 level at the 61.8% Fibonacci.